When we reached the Ataturk Airport, the immigration clearance process was no hassle at all, as we did the visa processing online before we flew. To obtain the online visa, visit the e-Visa website, fill the online application form, make the payment, then download the electronic visa. All the steps will hardly take more than 15 minutes. The cost of the visa is 25 usd per person.

At the Baggage Collection, I was looking for trolleys, and when I found them I had to use a coin to get one, and sure I didn’t have a single coin of lira. Oh well, we just pulled the luggages, no issue. Once outside I noticed that most people with luggage were without trolleys.

I’ve informed the hotel in advance that we would need a pick up at the airport. So there after the exit, I saw some names put up at a board, while looking for my name, the teenager next to the board asked me, “Mr. Idi Kurniawan?”, I said “Yes, It is me”. “Come sir, just wait here, I will call the taxi driver”, he said. After a while, he walked us outside, and a family van that would take us the hotel arrived.

It took around 20 minutes from the airport to the hotel, Best Western Premier – Regency Suites in Sultanahmet. After having the welcome drink, which was cay (tea) for me and my wife, and apple cay for the children, we went up to the room, took showers, and ordered some pizzas from the hotel. We found the pizza tasted really nice, or probably it was just because we were so hungry? 🙂

I was thinking of having some rest at the hotel, but my wife and children were so eager to see the surrounding. Well, so I okayed it, I thought they were tired. Since it was only around 2pm, we had more than a couple of hours for strolling around before it got dark, sunset was around 5pm. 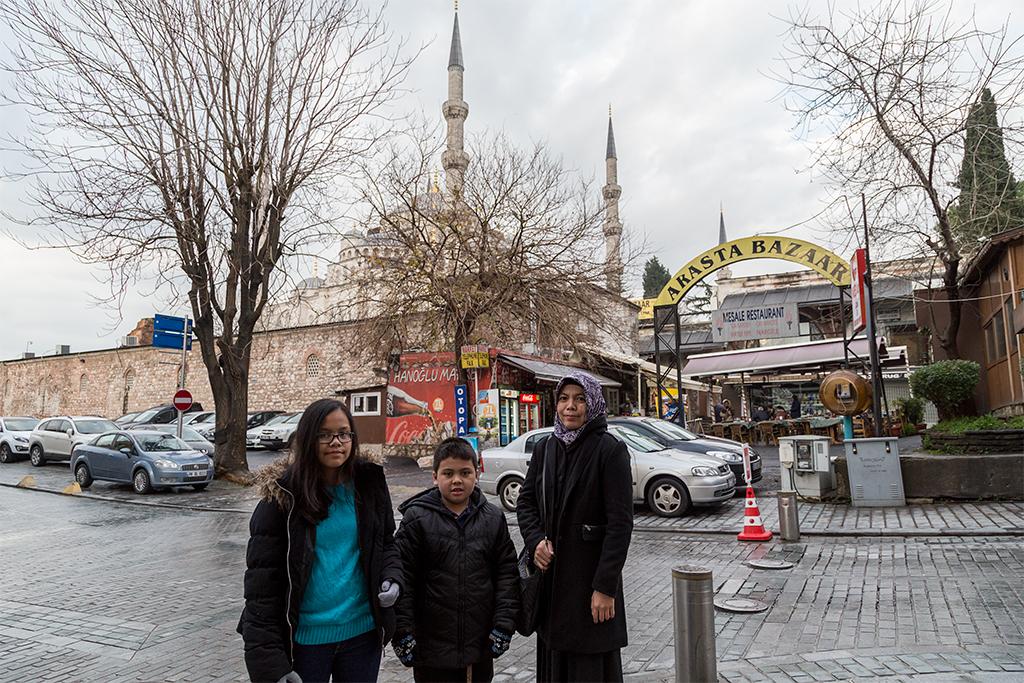 Sultanahmet square is just around 500m from the hotel. On the way, we passed Arasta Bazaar. It is a small bazaar just next to the Sultanahmet Mosque, having some souvenirs and traditional food. We were surprised that in that cold weather, around 5-7 degree celcius, tourists were many all around the area. I can’t imagine how it will be in the spring or summer. 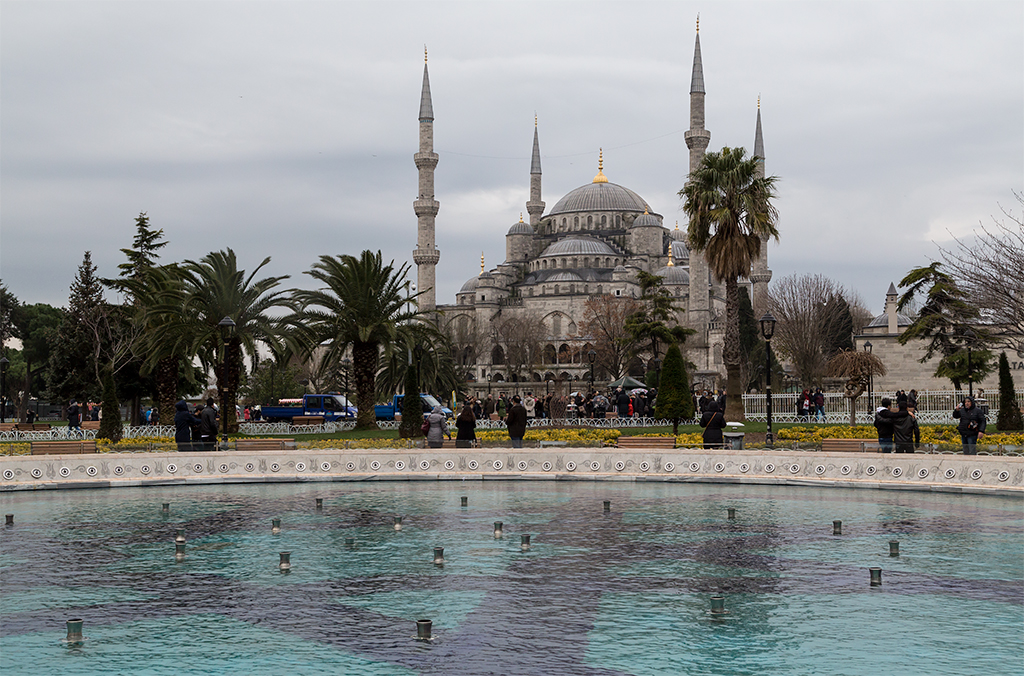 Upon seeing the Sultanahmet Mosque, Hagia Sophia, Trams, and all other things in the vicinity, we were fascinated already. First photo, off course, was at the bench in front of Sultanahmet Mosque. Then we walked to the fountain to have some photos with Hagia Sophia at the background. We found that Hagia Sophia was still open, but the queue was quite long and it was already around 4.30, It would close after 30 minutes. Oh well, we just saved this place for other day. Around the square, we saw some numbers of street dogs, they were not aggresive, but they liked to follow people. They’d bark if we showed them that we were bothered, best to just ignore them. 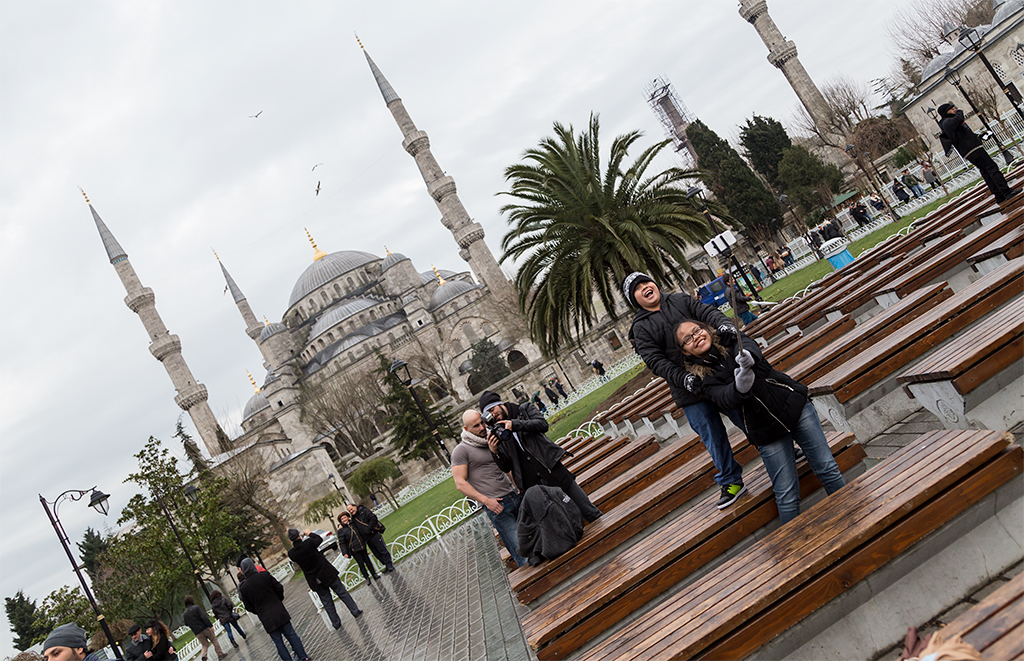 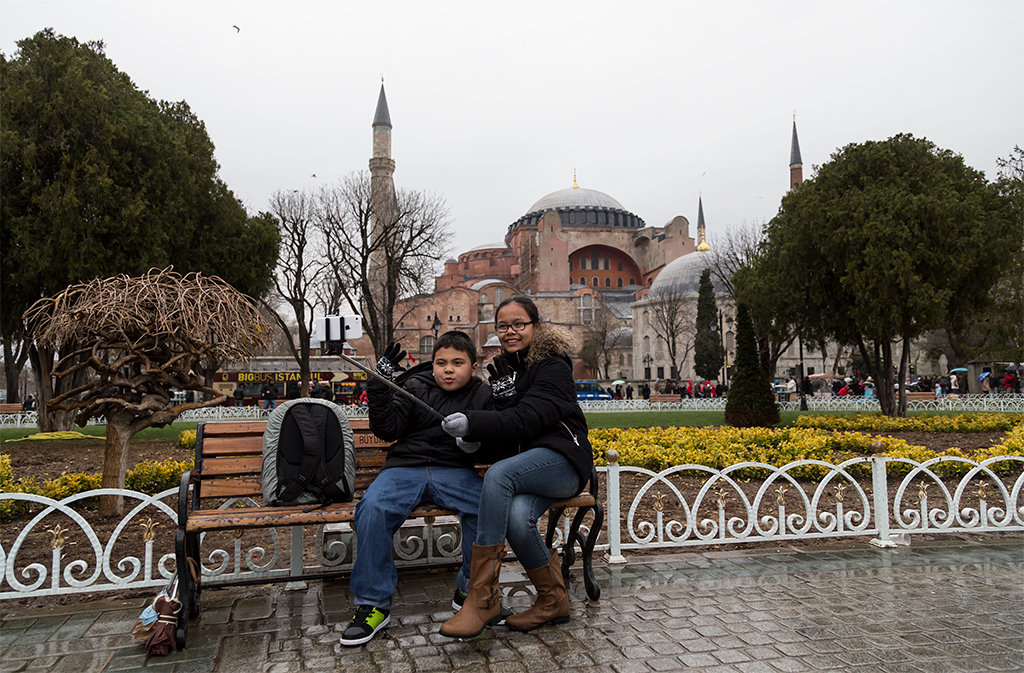 We continued walking toward the Tram. One thing we noticed that the road is shared by the tram and other vehicles, something that cannot possibly happen in Indonesia 🙂 . It was raining there, although we’ve prepared some compact umbrellas, but the transparent umbrella people sold here was the thing we didn’t want to miss. Some children reached us  and offered us to buy the umbrella, we got one for 10 liras. 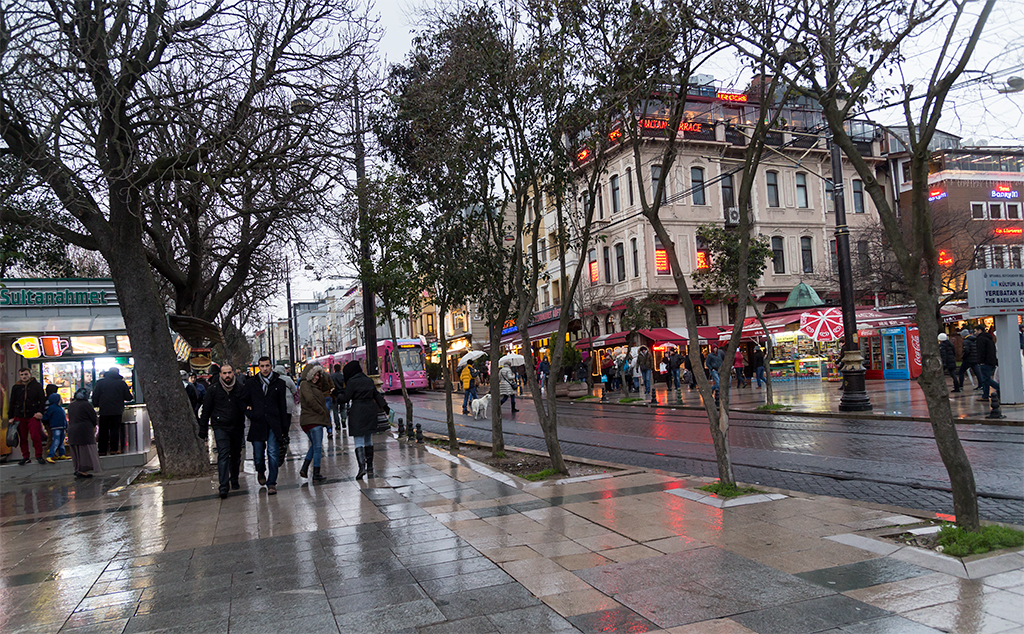 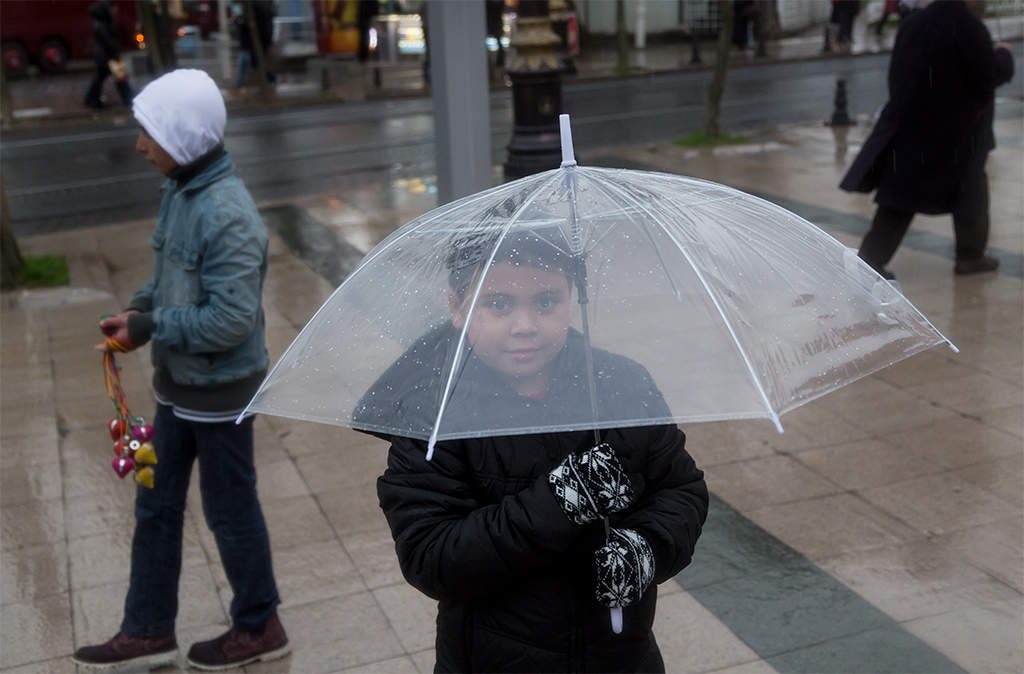 The rain continued and it was getting dark, and we decided to head back to the hotel. On the way, we got intrigued by the snacks people sold along the street; chestnuts, corns, pretzels. This time we picked the pretzels. At the hotel, the children at last felt tired, and they were clueless of what they wanted for dinner. So I and my wife just went across the street to get them some kebabs, not too big and not too small of a meal, at least we didn’t skip the dinner, we needed to be fit for the upcoming days. 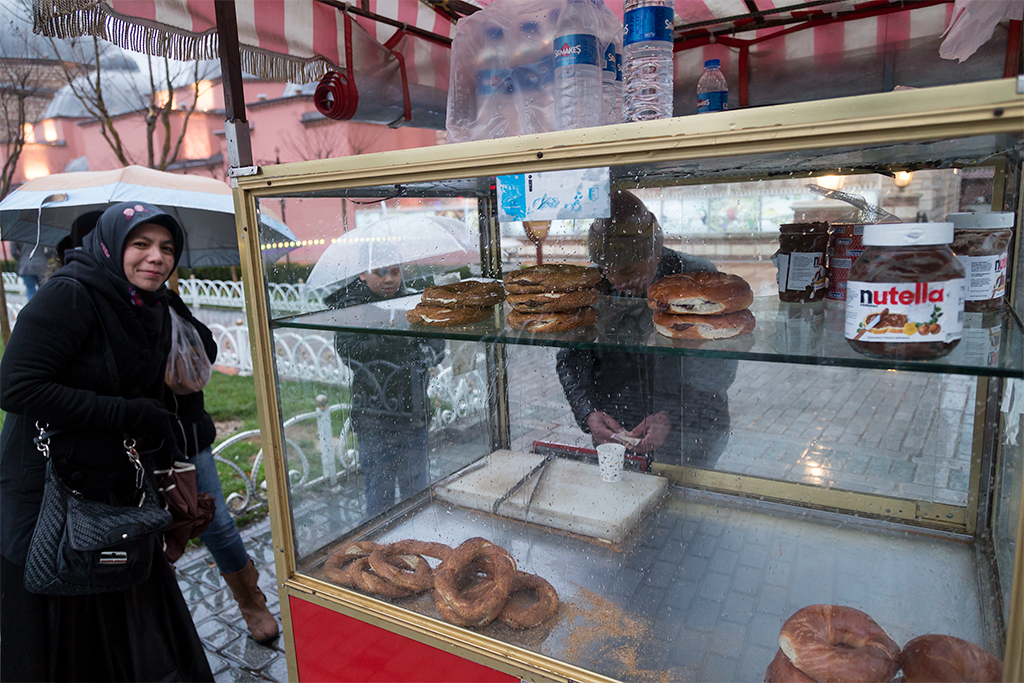 Okay, stomach was taken care of, body was washed, prayed, and rest for the next day packed schedule. 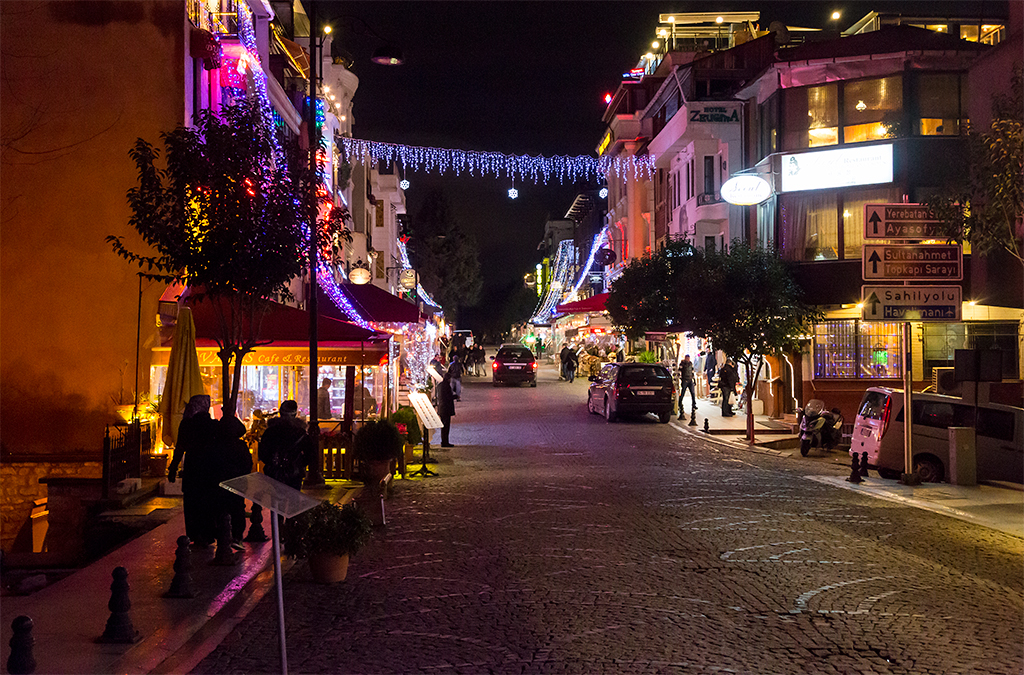 Marks of places in google map :